The dog days of summer in Texas usually begin around mid July and continue through the latter part of August. For those of you who live in Texas know that the dog days have been here since early May and have not left yet. Even though the temperatures have consistently been in the 100’s the hunting has stayed on par with the weather, HOT.
In August, Escondido Ranch had the extreme honor of hosting its first Wounded Warrior Project hunt. Sgt. Eric Edmundson joined us for an Exotic Axis Buck hunt which was his 2nd stop on his 2011 tour. Eric started in Florida with an alligator hunt and concludes his trip in the western U.S. with a mule deer hunt. We feel very blessed to be part of Eric’s journey.
Once Eric and his parents, Beth and Ed, arrived we greeted them in our hunting lodge and quickly unloaded all of their gear to get ready for our first evening hunt. Eric has a Polaris Razor that he travels with and hunts out of. The machine is set up in a way that Eric has 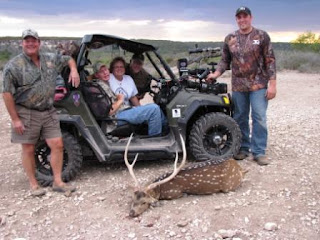 a camera and rifle mounted in the front of the vehicle and can maneuver it with the assistance of his father. These two make a great team. After we made acquaintances with the family and camera man August we prepared for our first hunt. I had the privilege of guiding Eric on his hunt. I was humbled to have this opportunity to guide a true patriot of our country.
I would be working directly with Eric’s father in communicating our strategy and potential shot. “Everything must be perfect” was running through my head as I was mentally strategizing this hunt. Under normal circumstances you do not always have perfect conditions but this was not going to be the case tonight. We had limited cover and needed to be within 150 yards to ensure the best chance to harvest an Axis buck. Axis bucks are very regal in appearance and highly sought after trophies by hunters and I wanted Eric to harvest the biggest buck possible. It was the least we could do for all he has done for so many of us.
We headed out to hunt about 5:30 that evening and when we approached the field where we would be positioned I noticed the wind had changed direction. Well, add one more challenge to the evening. Trust me when I say that Sgt. Eric Edmundson was up for this minor inconvenience, after all, this man has served our country as one of the finest soldiers in the United States Armed Forces and a little wind redirection was not going to stall our hunt.
After getting into position it wasn’t 20 minutes and the Axis started to lumber through the field where we were set up. As the animals approached you could see the excitement in Eric and his eyes lit up with joy. Several good Axis bucks were amongst the large herd of females. Our only decision now was which buck to harvest. That part was left up to me and I really wanted Eric to have the best trophy of his life. After several minutes of back and forth and in between, the bucks and does kept crossing into the line of fire with one particular buck we spotted. It was now just a matter of time. As 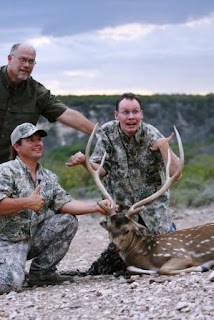 the anticipation grew we all were getting a little anxious. August on the camera had been rolling film for at least 20 minutes now and I was a little skeptical the deer would move on. And that’s when it happened! Bang! As the shot rang out against the mountain backdrop it sounded like a bazooka. The Axis buck jumped at least 6 feet in the air and kicked like a bucking bull you see at the rodeo. He ran about 20 yards into the thick brush right at the edge of the mountain and expired. Sgt. Eric Edmundson made one of the best shots I have ever seen. He hit that buck directly in the heart and you should have seen the tears of pure joy when he watched that animal make his way to the ground. We all were doing the ‘dance’ when Eric made that shot. One of the most inspiring hunts I have ever been a part of. The greatest part of all was that Eric’s mom and dad were there to witness their son’s victory. We all celebrated and congratulated Eric on his trophy.
The Wounded Warrior Project is an amazing program that I want to be a part of in the future. In this particular case it brought the dream of a U.S. soldier to fruition. Eric Edmundson will get to continue his lifelong dream of hunting these trophy animals all over the United States. A special thanks to Escondido Ranch and Wounded Warrior Project for making this possible.