To Bow or not to Bow – Hunting for a Texas Axis Buck!

When I was young boy I spent most of my fall and winter weekends in the corn fields of Iowa. Accompanied by my Brittany spaniel, I can recall walking for miles hoping to kick up a covey of quail or pheasant and get even a single bird. It was during these years I learned a respect for nature and felt the first inclining for the relentless pursuit of wild game. You may assume that growing up in the Midwest also meant hunting for big whitetails. Alas, I never took an interest in deer hunting until some 20 years later.

Now a proud Texan, you can say that my family life essentially revolves around chasing big exotic trophy and whitetail bucks nearly every weekend at Escondido Ranch. My wife's family has been guiding exotic trophy hunts there for over 20 years. Needless to say, I love this lifestyle and look forward to everyday at the ranch. I can honestly say that we do what we love and we love what we do!

When I heard that we had a father and his 13 year old son coming from Houston to hunt Axis bucks at Escondido, I knew it was going to be an exciting weekend. Many 13 year olds don’t have an opportunity to shoot or even see a trophy class Axis buck. 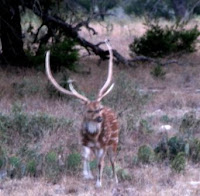 So, when I did meet our young hunter, I jokingly told him that I was going to live vicariously through him, since most of my time at the ranch is spent guiding hunters rather than hunting myself. However, I do truly find guiding to be as enjoyable and rewarding as hunting. I simply love the challenge of using my skills and knowledge to put a hunter on a big exotic buck…and I was going to do everything in my power to put my young hunter on an Axis deer of a lifetime. I was looking forward to this hunt especially since I personally love to hunt Axis bucks.

Throughout the weekend, we had some close encounters with some really nice Axis bucks, but nothing would top Saturday Night's Buck Fever!

You could not have asked for a more beautiful evening in South Central Texas. Cloudless sky, cool breeze; you just knew there was going to be lots of activity tonight. As we drove along the river we watched several Axis does pause for a drink and quickly jolt for cover as we rummbled towards them in a jeep. When we crested the hill on the main road we spotted a number of animals running through the open fields, scattering from the noise of the approaching vehicle.

That evening the young man had convinced us to let him trade in his rifle for a bow. Although, he acknowledged that due to its limited range, bow hunting would lower his chances to harvest a trophy, he was willing to take his chances. I am an avid bow hunter myself, so I was really stoked at the opportunity to take a big axis buck with a bow.

That evening, we made our way to an area known as Burnout. Perched atop a two-man bow blind, 20 feet above some heavy brush, we were charged with anticipation when…, out of nowhere, a huge 35 inch main beam Axis buck just appeared right below us. This was the kind of animal that simply takes your breath away. I’ve seen some big deer, but this was a monster Axis. It had width, length and mass. An Axis trophy deer of a lifetime for any level hunter!

You can say we were caught a bit off guard and it took me a couple of seconds to find the record button on my camera. But when you get an opportunity at an animal of this magnitude at this range and with a bow in-hand, you absolutely want to capture it on video.

This buck was literally 18 yards away from us. But, we had a very, very narrow shooting window through the surrounding foliage. It was going to be a tough shot. The young man stood firmly and pulled back on the string bringing the bow to a full draw. As he was taking aim, we heard alarm calls from some nearby whitetails. The axis buck sprung to alertness and moved towards the edge of the brush and away from our shooting lane. The young hunter let down his bow with a sigh… It took several moments for the adrenaline rush to settle down and for us to be able to regroup. I tried to reassure the young hunter that we will have another pass at the axis, but even I was not sure. Alas, I was proven to be right as the axis buck reappeared soon after but further away from our position and with no clear line of sight. When we saw the axis buck for the third and final time, shooting him with a bow was an option.

At this stage second guessing yourself on whether we should have brought a rifle instead of a bow, is fruitless. Sometimes it works out like that. That’s why it called hunting and not shooting. We did get some good video footage that night, but no bragging rights. Throughout the weekend, we saw multiple native and exotic animals along with a number of trophy class deer, but as importantly, we had as much fun as two hunters could have without harvesting an animal.

Epilogue: I am sorry to say that the young man is now an addict. An axis addict that is! It is a good kind of an addiction which can be temporarily cured with a harvest of a large axis buck. But then…you need another fix. The young hunter has already convinced his father to return for another hunting escape at Escondido Ranch later this year. And we will look forward to seeing them then!

Comments:
Great job for publishing such a nice article. Your article isn’t only useful but it is additionally really informative. Thank you because you have been willing to share information with us. best hunting trips for couples