Lexus, Laughs, Back Strap and Porcupines…

On most hunting trips the main transportation in Texas is a 4 wheel drive truck or SUV. On this particular trip to Escondido Ranch, Gary (aka The Russian) asked if I could drive and I suggested we take my car, a luxury sedan, instead of the Suburban. I told Gary we would get there much faster and would spend a third of what is usually spent on gas and we could drive there and back on the same tank of gas and once at the ranch there would be plenty of hunting vehicles to use. Gary’s first response to the suggestion was a pause, and then he suggested it would be better if he drove in his SUV! Well I convinced him to take the car and after the trip he decided it would be the new official vehicle for all future trips to Escondido Ranch. The best part about it was pulling up to the barn in a luxury sedan and everyone hanging out waiting for us to arrive and when we stepped out we were in full camo face paint ready for the evening hunt.

Feral hogs and porcupines were on the menu, as deer season was opening the next morning.

Upon arrival we unloaded our gear and sighted in our bows for the evening hunt. We all gathered around and drew numbers out of a hat to see what the order would be on blind selection. The blind I chose for the evening hunt was Central Canyon blind a great place for feral h 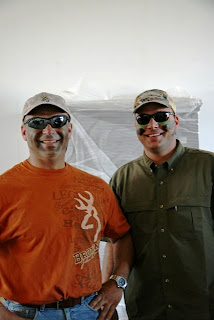 ogs and the elusive porcupine. I had all species of game, Aoudad, Axis, Sika, Elk but no Feral hogs. As the sun slowly disappeared and darkness began to set in I caught a glimpse of an animal that was very slow moving, a giant porcupine! As I picked up my bow to get a shot, I realized it was just too dark to get a shot. Plan B was in the works, I climbed down the tree and when I hit the ground I was spotted by the porcupine and he began to run!!! This one was like Carl Lewis, the fasted in the world. I chased him up the hill and he stopped, I drew back and flung the first of MANY arrows for the weekend. I felt like it was a direct hit but wasn’t sure. He climbed the tree like a monkey and was gone into the night. One lost arrow and a hilarious story, I headed back to camp empty handed. We had a few good laughs over a delicious dinner which consisted of Axis back strap, salad, green beans and excellent toasted bread! We were all really excited about the opening of whitetail deer season the next morning.

Saturday morning is here, my alarm went off at 5 o’clock sharp and we were ready to hunt. I chose to hunt at Valentes blind, down on the river flat near the front gate of the ranch. We were able to bring 3 arrows to the stand for each of our hunts; we may need to re-think that approach in the future! As the darkness began to fade the feeder went off and three whitetail doe’s appeared like ghosts. I drew back and release the first arrow; it sailed over the back of the whitetail doe. She ran 50 yards and reproached the feeder. I set my next arrow and as she came within range, released arrow number 2. It hit the ground just under the whitetail doe, not sure what to think at this point. I was pretty disappointed to say the least but the whitetail doe must have thought she was invincible or had an invisible force field. She came right back to the feeder and wanted to test me again. I released the 3rd arrow and another clean missed over her back. I this point all three arrows I brought to the stand were all in the field. Well it was 7 am and I was out of arrows. I could either sit there with no ammo or I could retrieve my arrows and chance seeing anything the rest of the hunt. I decided to leave my bow in the stand and retrieve the arrows. The whitetail doe I have shot at three times is sitting just beyond the feeder while I was retrieving the arrows. As I picked up the second and last arrow I could find the whitetail doe started to charge at me, wasn’t sure what to do at this point as I have never been in this situation, I ran back to the stand. As I climbed in the stand the whitetail doe was at 30 yards, I loaded another arrow and proceeded to shoot both of the arrows at the whitetail doe. Each shot missed by a long shot as the broad heads must have been bent up from hitting the rocky terrain on the previous shots. This whitetail doe was either really smart or just really lucky. After the fifth shot she finally fled into the brush! Not sure that record or experience will ever be matched. Well, down from the stand again to find a few arrows to possibly have a chance at another invincible deer. I did not get chased back to the stand this time but on my way up the ladder, I spotted another whitetail doe. She probably felt pretty safe eating under this particular feeder. I cleaned up my arrows, bent the broad heads back into what working shape and patiently waited for another shot. I knew I could not go back to camp without a whitetail doe, feral hog or porcupine at this point. The trash talking would be to extreme, and I might not be able to overcome it.

The whitetail doe came in from the right side and was unaware I was in the tree. I released the arrow and perfect hit. The whitetail doe turned and jumped and the arrow was logged in the side. She ran into the field and stood there like a statute. I could not believe my eyes, after about 20 minutes she was still standing. I decided as an ethical hunter I would go after the animal. I climbed down from the stand and began my stalk. I eased within 20 yards of the whitetail doe and released the final arrow in my quiver. She ran 20 yards and was down for the count. Seven arrow 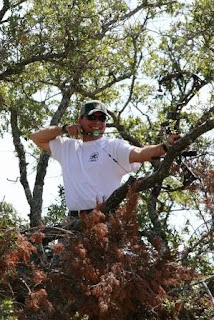 We met back at the cleaning station to discuss the morning with all the other hunters. They could not believe I was able to attempt to shoot seven times. I was the only one with an animal! Brad and I decided we should go back to Central Canyon to track the “Speedy” porcupine. As I eased into the brush to look for blood on the tree, we spotted what was left of the arrow and not far from there Brad located the retired “Speedy” porcupine. Now I was technically 2 for 2 in my mind. Good laughs back at camp with that one!

Our afternoon was filled with good times at the archery competition down by the river. We shot from elevated stations at 20, 30, 40 and 50 yards. I managed to hit the whitetail buck target at 50 yards in the neck all four times, not in the kill zone but in the neck with the practice arrow and three competition arrows! As you could imagine the jokes back in fourth we pretty amazing.

The afternoon hunt had arrived and I selected to hunt at Burnout blind on the back part of the ranch. Only the brave make the trek to this park of the ranch. This is where the big and wild animals roam. Animals were everywhere; I saw a trophy Fallow about 200 yards away and told myself if the fallow were to come within bow range I would be a paying customer for this trip. I had a few whitetail bucks at the feeder along with a young Sika buck. I saw several whitetail doe’s, just none in bow range. As the sun began to set, a whitetail doe appeared under the feeder at about 25 yards. I released an arrow and shot just over the “back strap” (from the spirit of the wild, Ted Nugent) of the whitetail doe. She fled the scene and the evening hunt was over. We all headed back to the main house for a delicious meal of fresh Red Snapper, salad, potatoes and a few good cocktails.

The final morning I again picked the Burnout blind based on the previous evening hunt. I quickly noticed upon arrive the wind was not in my favor. It is amazing to see the senses of wild animals as they would appear along the brush lines and never work into the feeder, only to disappear into the woods. The hunt was over around 9 a.m. and the final weekend tally was set to begin at the barn. I ended the weekend with 1 porcupine nickname “Speedy”, Betty is mounting for the main house, 1 whitetail doe. I finished tied for second place. Not a bad start to my bow hunting career! I think the memories of this trip are untouchable and look forward to the Annual Escondido Ranch Arrow Addiction weekend.

Thanks to the Wiseman Family for another great adventure and Tony “Godfather” Lyon for lots of laughs and hard work!