The night before ended on a VERY uplifting note. The Texas Rangers celebrated their first World Series appearance in franchise history! I had the opportunity to celebrate this victorious moment in a company of ten other Ranger fans. The fans were actually a group of attorneys from Dallas, Texas who joined us for a weekend of hunting exotics and whitetails at Escondido Ranch.

I woke up the following morning still high from the previous night's victory. At the morning's round-up, the hunter I was guiding expressed an interest in a trophy Axis buck. With that said I had a spot in mind and we headed to our location.

We got into our blind about 6:30 am and waited for the sun to crest over the hillside. But, when 8:00 am rolled around, we had managed to see only a few whitetail does. We were growing anxious. Glassing over the area, I noticed some activity at a distant tree line. I turned to the hunter and drew his attention towards a tree on the horizon. With his binoculars zeroed in on the spot, he could clearly make out a giant bull elk roughing up a large cedar tree. Even though our original objective was to find a big trophy Axis buck, 5-6 feet of antlers on a 700 pound bull elk can quickly change a trophy hunter's mind. In a classical scenario of "keeping your options open," we were now hunting the bull elk! 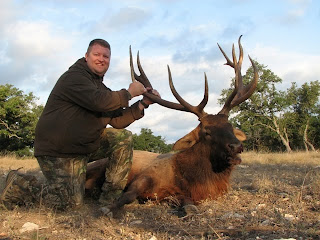 The decision was made then to vacate the blind and try to intercept the bull elk before he moved down into a nearby canyon. The big elk had about a 250 yard head start on us and we had to move fast. Moving quietly, but with certain deliberation we covered the distance as quickly as possible without alerting the animal to our presence. Hiding behind vegetation and hugging the tree line we approached an open area sloping towards the canyon. As we paused near some cover, we started glassing for the elk. After a couple of passes, we spotted the top of antlers hovering above the swaying tall grass. In order to get a better vantage point, we moved briskly towards a clump of live oak trees. I asked the hunter to get as much concealment as possible. Meanwhile, throughout our chase, I had the dubious job of keeping the camera rolling while keeping the bull elk in frame, and now, I was trying to make-out like a bush.

The mature bull knew something was not kosher. But the strong, favorable wind and the shielding from trees kept him from pin-pointing our location. At first it seemed that the bull elk may actually turn and walk away from us. Given the area we were hunting, that would have made it extremely difficult for us to cut him and then try to get a shot. Fortunately, the elk probably grew weary of trying to identify the "funny vegetation" and decided to change his viewing angle. His decision would ultimately prove to be fatal. The giant animal, swaying his head from side-to-side, gradually closed the distance separating us.

In a matter of minutes, the bull elk was within mere 70 yards from our location. As the bull elk moved closer, the hunter was forced to adjust his shooting angle until the bull finally gave him a clear broadside shot. When the big bull elk finally paused, a slim tapered 30-06 rifle bullet made its way through the heart and lungs of this 700 pound monster.

What followed was an intense blur of gun smoke and emotional release. With the camera rolling the hunter and I were impatiently awaiting our triumph. In a few seconds it was all over. The giant elk dropped to its side and the ground shook beneath its massive body. "Exhilaration" was the best word I would use to describe the hunter's emotional state. Indeed it was! I have enjoyed many hunts on Escondido Ranch, but this one will be hard to beat. Come experience a hunt like this for yourself and feed the wild side in you.