Arrow Addiction: Who Let the Does Out!?

The following morning was the whitetail bow opener and the whitetail does were now on the menu. Even though, I saw multiple animals that particular morning, none were within shooting distance. However, a point worthy of mentioning is that Sparky out did himself, again! Although, I’ll leave the story telling to the Man, on the opening morning of the whitetail bow season, with only three arrows in his quiver, Sparky shot at a whitetail at least 7 times. Finally shooting the same doe three times, twice with the same arrow! Yes folks, it is a true story, and NO, the animals at Escodido are not tied down to a tree. Sparky is just that good!

After a friendly, mid-day 3D target shot, won by BeerHug and second paced by Godfather, we planned out who is going to hunt where for that evening. I was fortunate enough to get to hunt my first pick. Named after The BOSS herself, 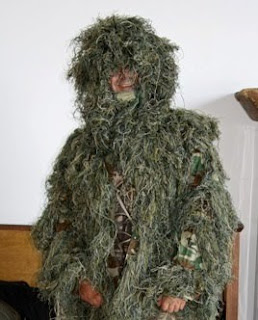 Betty, this area is often frequented by fallow, aoudad, hogs and more importantly, whitetail does.

So for my evening hunt, I dawned on my ghillie suite, which doubled as a Cousin It Halloween outfit, sprayed down with a scent eliminator, and accompanied by Sparky and BeerHug, sped-off to my drop-off point.

A couple of blurring miles later, Sparky brought the truck to a screeching halt on the far side of the feeder. While I was getting situated in the 12 foot tripod stand, he was kind enough to lay down a strip of corn on the near side, about 30 yards away from my position. Then, he and BeerHug hopped back into the truck and drove off leaving behind a cloud of dust. Yep, it’s been a dry fall so far at Escondido Ranch.

Nonetheless, it was a pleasant fall afternoon with the temperature in the mid-70s. The wind was light, but variable and for the time being it was blowing parallel to the feeder and my stand. The tripod was comfortably nestled between three cedar trees and I had about 120 degrees of viewing area. It was still a couple of hours before sunset and I did not anticipate any activity until right before dark. So, I took the time to range some identifiable objects around the feeder. Then I placed an arrow into the bow and waited.

Except for birds’ chirping and an occasional hog grunt from somewhere in the canyon below, it was all quiet. Sitting motionlessly atop of a tripod for nearly two hours is a test of anyone’s patience. The ground blind sitting across from me 100 yards away started to look like a 5 star hotel. Time passed at turtle’s pace, and the turtle was dying.

I was doing mental arithmetic to try to stay alert, when, finally, I was lurched back to reality by noise coming from behind a tree in front and to my left. I knew something was cautiously moving closer and based on the sounds I guessed it was more than one animal. Through the sparse foliage I caught a glimpse of a brown hide, then a distinct white tail, and finally an antlerless head of a whitetail doe. My heart’s pounding resonated in my ears so loudly that I thought the deer would hear it as well.

Before the deer stepped out into the open, I realized that my precarious, mostly exposed position only 12 feet off the ground would make it difficult for me to hide any movements once the deer cleared the tree. Anticipating that the deer would move right towards the generously laid out strip of corn 30 yards away and just as the lead doe appeared on the edge of the tree line, I decided to take a chance and went to a full-draw.

Meanwhile, I was straining to hold the bow at a full draw. Knowing that drawing-down would most certainly scare off the deer, I had no choice, but to take aim. More than that, the whitetail doe was standing at a spot which I did not range. Perhaps, in my spare time, I should have worked on geometry instead of arithmetic. So, I guesstimated the distance at 35 yards, placed the space between the second and third pin behind the shoulder and released the arrow…

This is the part where I would be telling you about how thrilled I was to harvest my first animal with a bow… NOT!

The arrow slid right underneath the doe, hit a rock, made a loud clanking sound, split into three pieces and skidded to the other side of the dirt road some 40 yards away.

The does scattered in a blink of an eye and retreated to higher ground, far beyond the reach of my bow.

I missed!!! Wow! I was flabbergasted. All those hours of practice! All the preparation! All the crap I will have to take from the guys!!! 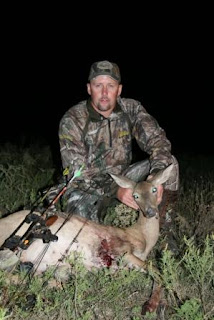 I set in the tripod to let the adrenaline and the emotions settle. I was replaying the scene in my mind, image by image.

What could I have done differently to ensure a desired outcome? Should I have waited to draw until the whitetails settled down over the corn? But then, with several pairs of eyes staring in my direction, I would have run the risk of being spotted. Should I have ranged the distance before I came to a full-draw? Yes, but would have the nervous doe bolted as soon as she saw any movement. Did I make a poor shot? Maybe, but I was very comfortable shooting within 40 yards, at least at targets. Did I simply estimate the distance incorrectly..?

I set there for 15-20 more minutes second guessing my decisions. I was hoping that a hog or a doe would appear to save the day, but it was getting too dark and I simply could not sit still any longer. I climbed from the tripod and walked to where the doe was standing. There was no blood or hair, just a broken knock. From the spot, I ranged the tripod. The distance flashed at 41.5 yards, six and a half yards further than my estimate. Was that mistake in distance enough to explain the miss? Perhaps…

It was dark by the time BeerHug and Sparky picked me up. Neither one of them harvested an animal, but Sparky had another opportunity at a doe, but choose to be merciful and vaulted the arrow over its back.

The story of the day was Bullseye. He was not only successful at harvesting two whitetail does in one outing, but also managed to tape one of the shots. That gave Bullseye an overall lead which held out to make him the winner of the Escondido Ranch Arrow Addiction First Annual Bow Hunting Weekend.

The irony was that Sparky took second place with one doe and one porcupine (recovered the following morning). The moral of that story is that if you shoot enough arrows, sooner or later you are bound to hit something. So for next year I propose that any bow hunter is allowed only three shots at an outing. That should even out the field for the rest of us.

I did not get an animal that weekend. But, this was only the start of the 2010 whitetail season and there is still plenty of time to realize my goal of taking my first animal with a bow.

We had a very fun time with a good group of guys and great hosts! Thank you to everyone who made this possible and we’ll look forward to doing it again!