Arrow Addiction: The Truth Be Told... 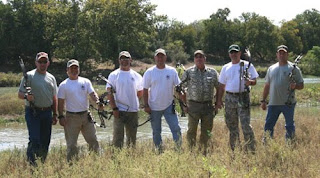 The truth be told, I was as reluctant to purchase a bow as I am to go to a dental office. After all, I am perfectly happy shooting animals with a rifle. But it was made abundantly clear to me that if I wanted to participate in the Arrow Addiction tournament at Escondido Ranch the opening weekend of 2010 bow, whitetail deer season, I had no choice. So after a bit of pouting by me and lots of cow prodding by Tony (a.k.a. Godfather), I finally settled on an earlier model of Matthews bow. But before I could even start target practicing, I had to get fitted, sighted and accessorized. It was like planning a wedding, only in camo.

Well the day finally arrived! No, not the bow opener, the day I could finally start practicing shooting the bow. So, after a series of verbal instructions from Godfather, sight pin adjustments and a couple of rounds of “find the missing arrow”, I was finally getting the hang of it and, to my surprise, I liked it! Thankfully, the opening weekend of the bow hunting season was still a few weeks away, so I had plenty of time to practice…and practice I did.

Friday, October 1st, 2010 finally rolled around and all of us gathered at Escondido Ranch to initiate t 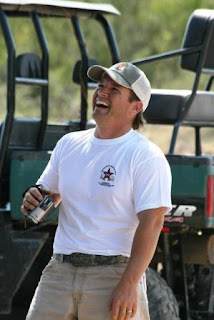 he first, annual Arrow Addiction tournament. In addition to Godfather, the following were also present at the scene:

• Brent (a.k.a. TriggerHappy or Sparky)

• Gary (a.k.a. GhillieMonster or The Russian)

• Our camerawoman Heather (a.k.a. SteadyLady)

• Last, but by no means least, our gracious hostess Betty (a.k.a. The BOSS)

All of us come from varied backgrounds, but all of us have one passion in common…hunting. So, needless to say, with testosterone in abundance, there were plenty of bolstering and favorable predictions on who is going to win the tournament. The rules of the tournament, as determined by Godfather, the tournament’s organizer, were fairly simple…X number of points for a whitetail doe, Y number of points for a hog, bonus points if the hunt was captured on film, etc. I am pretty sure that during the rules’ presentation, everyone probably just heard “doe”, “hog”, “shoot”, “win” and the rest was just a blur.

Since the first evening hunt was the day prior to the opener, our objective was to scout and if an opportunity presented itself shoot only hogs. So after a few, quick test shots at the targets, we all scattered to our designated blinds.

My blind that evening is actually called Tree Blind. A few hundred yards walk from the Guest House, this particular blind is located in a triangular shaped area bordered by woods on two sides and a dirt road on the third. This area, located near the river, is favored by black buck antelope, Elk cows, axis does and is frequented by hogs.

Crunching my way along a path covered with dried-out fall leafage, I jumped several axis does and a lonely whitetail doe all of which were grazing near the far tree line. Good thing the bow season was 12 hours away and I was not yet that upset at the whitetails.

So after playing Spiderman on my way up the tree, I finally settled into a single man blind resembling the remnants of a movie set from Kevin Costner’s Waterworld. Perched on top of a y-shaped, nearly horizontal oak branch 12 feet or so off the ground and covered up by brush and leafage, I was just as well hidden from the animals as they were from me. So, I did a quick trim to open up my shooting lanes.

I did not take long for a young whitetail doe to emerge from the brush and cautiously move towards the feeder. With the wind favorable to my location, I could only watch helplessly as the doe made its way to within 30 yards of my perch. But before it could settle over a strip of scattered corn, it was run off by a turkey raiding party. With a total of eight birds encroaching from two sides, the young whitetail doe backed off and the victorious hens moved in. After satisfying their hunger, the turkeys vacated the area and I set in dead calm with only the sounds of falling acorns and distant calls from dominant axis bucks breaking the silence. The next sounds I heard were those of rustling leaves coming from behind me. I could hear several animals approaching from behind, but I had no way of seeing them. Finally, one whitetail doe appeared on my right flank, but as I swung around to get a better look, I shook the tree and a few acorns fell thunderously to the ground. The warning yelps and foot stomping from behind me sent the deer running back into the brush. Busted!!! Sigh…live and learn, this is not rifle hunting from a distant tower blind. 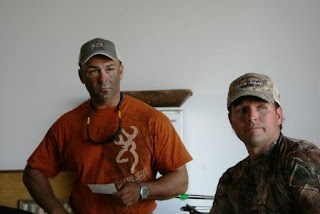 nd the nearby hills and dusk settled-in. I was ready to call it in, when all of a suddenly, several black shapes appeared from nowhere and right below me…HOGS! I exclaimed silently. But, I had no shot through the surrounding brush and by now I could barely see my sight pins. I sat there in absolute silence waiting for the hogs to swing around to the right and pass in front of me. Instead, what looked like a large boar, a sow and a troop of piglets turned to the left and trotted into the prevailing darkness.

I got out of the blind and shuffled my feet back to the Guest House where the troops were gathering after an evening’s hunt. Although nearly everyone reported seeing multiple animals including whitetails, only one other had an opportunity at a hog. But it was Sparky who chased a porcupine up a tree and scored -200 points for losing an arrow and not retrieving the animal!