Well, it started off with a phone call from my good friend Tony (aka Godfather) who asked me if I was interested in participating in a whitetail deer bow season opener challenge. Tony told me that he was organizing an archery contest at the Escondido Ranch. The contest consisted of hunting whitetail does and hogs along with a 3-D target shooting competition. My curiosity was peaked when Tony uttered the words “challenge and hunting whitetail deer” in the same sentence. Tony also asked me if my brother Mike (aka BeerHug) would be interested in joining us at the ranch. It was an intriguing proposal to have a friendly competition between two brothers and that’s when the invitation really appealed to me. Since my brother is shooting a Hoyt bow and I own a Mathews (A REAL BOW), it would also be a competition between the two most recognized archery names on the market. Also, since Brent (aka Sparky), Gary (aka The Russian) and Brad (aka Bullseye) were also in the mix, both my brother and 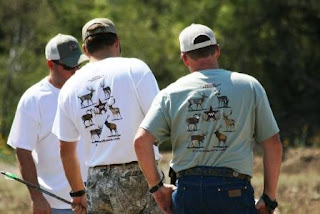 I jumped at the chance.

Driving to Escondido Ranch, a couple weeks later, we could not have asked for a better day. Great weather and little traffic made the four hour drive from Houston go by quickly. I enjoy driving to Escondido Ranch as much as I enjoy being there. Driving through the rugged hill country of South Central Texas and seeing so many Deer X-ing signs is very motivating for a hunter. Traveling on I-10, we never pass an opportunity to stop at The Beaver (commonly known as the Buc-ee's truck stop). There, you can find just about anything to satisfy your taste buds. Buc-ee's is my preferred stop for jerky and beaver nuggets. A little further, we made another stop in the town of Kerrville and purchased some freshly baked bread from a great, local bakery.

We arrived at the ranch in the early afternoon and unpacked at the Guest House; we lovingly refer to as the Barn, because of all the “animals” that frequent there. This weekend would be no exception. The guest house consists of four very tastefully decorated bedrooms, a TV room, an office, a stand-alone kitchen and facilities in every room. In addition there is a large covered area which can be accessed by a car, or a bus for that matter.

While Bullseye, Godfather and SteadyLady were already present, it did not take long for the remaining competitors to arrive. Sparky and The Russian pulled in a luxury sedan! A far cry from a hunting vehicle one would expect to see at the ranch. But when they exited the vehicle with their faces painted camo, we knew the game was ON!

During the first evening hunt, I set in a tree blind and watched everything from, axis deer to elk to fallow deer and sika, but no feral hogs. Then I got a text from my brother. Hogs were at his feeder. I wished the best to my brother, but he was using a Hoyt bow and the odds were stacked against him. A few moments later another message from bro read “pig stuck”. At that point, I was worried I may have to eat my words. So, after a few more minutes of watching exotic animals, I decided to go help my brother look for his feral hog. But when I arrived at BeerHug’s stand and watched the video, I could quickly tell that the arrow sailed right over the hog. Although, the same thing happened to me not too long ago, I did not waste an opportunity to point out that this is what happens when you use a Hoyt. We recovered his arrow and went back to the barn. 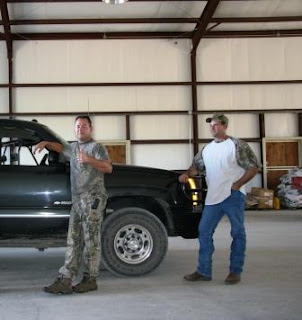 The following morning, I decided to hunt the Windmill blind which always has lots of animal movement. As the daylight broke, I saw great looking whitetail bucks moving around. Later a trophy size black buck antelope with its harem of blackbuck does came by. However, I was not lucky enough to have any whitetail does come in close enough for a shot, so I decided to call it in around 9:00am.

On Saturday morning we gathered for a start of the 3-D archery competition. I knew I could not let my brother beat me since I would never hear the end of it. We started off shooting at 20 yards, 30 yards and then moved to 40 and 50 yards. It was a tight competition through the end and it was going down to the 50 yard shoot-out to tell who was going to be the winner. As I came up to shoot, the cross wind started to howl! In-spite of my adjustments, the arrows were just a little off the bulls-eye. But my brother was more fortunate. When BeerHug’s turn finally arrived, the wind slacked off, and amazingly, he was able to hit the target with remarkable accuracy. It was a sour-sweet competition for me. As the results were tabulated, my brother placed at the top. I asked the judge for a recount, but the results stood. I am proud of my bro, but it was apparent to everyone that the wind played a significant role in my brother’s win. How else could a Hoyt beat a Mathews?!

Sunday morning rolled around and I made my way to my favorite hunting spot called Valentes. As soon as I got into a tree blind, I was spotted by a sika deer which proceeded to bark at me and would not shut up. I could not shoot it, but the thought did occur to me. I even thought about throwing my water bottle at it. Finally, the sika deer left and a whitetail doe came up from my left and proceeded towards the feeder about 35 yards away. As whitetail doe began to munch on the corn, so I began to pull back on the bow string. Once at full-draw, I stood up and let the arrow fly directly into the back quarter of the whitetail doe. Appa 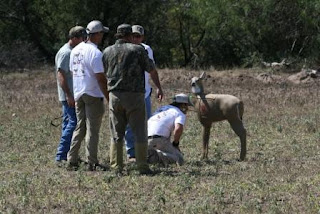 rently, the deer heard the string snap and jolted forward. Thankfully, the rage broadhead did its job! The whitetail doe dropped to the ground about 40 yards from where I let the arrow fly. It was my first animal killed with my Mathews bow and I was very pleased. I recovered the whitetail doe and made my way back. Upon my arrival to the Barn, I was pleasantly surprised to find out that due to a deduction for a lost arrow, I tied with Sparky for the second place.

The entire Arrow Addiction contest was awesome and I have not had that much fun in a long time. I want to thank Kurt, Betty, Tony, Heather, and all who helped out with that weekend of fun.