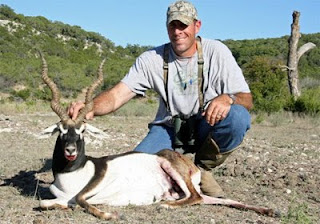 When you live in Texas you learn to deal with 100 degree temperatures for most of the summer and certainly look forward to the cool fronts that take place in early fall. While the 100 degree days in Texas are over the hunting at Escondido Ranch is hotter than ever. Just this last weekend the Ranch hosted 3 trophy buck hunters two of which were native Hawaiians while the other joined us from San Antonio. Each of the respective hunters came with certain requests and needless to say the folks at Escondido Ranch were up to the task.

The weather was perfect as the mornings brought temps in the 50''s and highs in the upper 70''s. The animals seem to move more when it is cool in the morning and boy were they moving! The first evening hunt was spectacular as several exotic trophy bucks were spotted and one of the clients commented that he has never seen such a variety of wildlife. It is possible to enjoy and appreciate these amazing animals without firing a shot as these gentlemen were realizing. Since two of our guests drove 1100 miles one way from Las Vegas we thought it would be good to get a good nights sleep and start early the next morning. 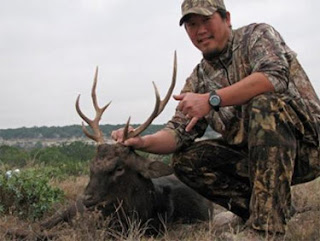 Saturday morning brought much joy to our trophy Black Buck hunter after we spotted a beauty across the river that runs through Escondido Ranch. We made a plan and were going to put a stalk on him but the wind was swirling and decided it was better to get up off the ground and try to make a long range attempt from an elevated position. The client made a great shot and 2 hours later we were filming the recovery. Kudus to the knowledgeable guides at Escondido Ranch. 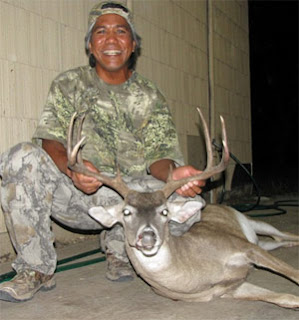 With one trophy buck on the ground we needed to be relentless in our pursuit of two more bucks so that our Las Vegas guests could put some antlers on the wall and meat in the cooler. Escondido Ranch offers several hunting packages that appeal to a variety of hunters. One in particular is the trophy package which includes a trophy exotic of your choice, an exotic doe and hog if you choose. This package also includes your lodging as well. We like to call it the ''Escondido Slam.''

The guys from Las Vegas were simply tenacious. They hunted nearly every hour of each day they were here and it proved worthy. Their motto was "you can''t kill anything from your bedroom." One of the men harvested a nice whitetail buck while the other made a great shot on a giant Sika deer on the last morning before they had to depart. Both men left with their trophies and one was fortunate enough to complete the ''Escondido Slam.'' He took his trophy buck, an axis doe, and a giant boar hog. It was an awesome weekend and very representative of the hunting going on right now at Escondido Ranch.