The Hunt and Pursuit of the Giant Bull Elk

Big John McDonald has been hunting at Escondido Ranch for a number of years now and I had the pleasure of guiding him on a bull Elk this time. I'll never forget his daily saying to me as we started our day. He would take a drink of coffee and look at me and say "what are you thinking Tony?" Of course my response was a quick "let’s go get us a big bull" but as Saturday rolled around and the previous two hunts were unsuccessful I was beginning to wonder. It was Saturday morning and like the day before we were unable to locate any bull elk 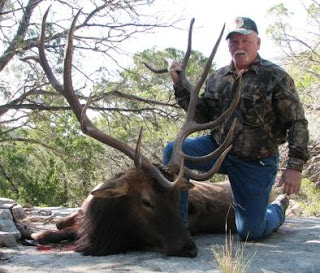 so we went back to the lodge and agreed to back out later that morning to see if any elk had come up out of the canyons to graze on the flats which they typically do. It was a worthy effort but to no avail.

It was about 3 P.M. Saturday afternoon and we met in the kitchen to make a game plan for our evening hunt. John and I were given full range of back part of the ranch which encompasses +/- 1000 acres to search for a bull elk. The ranch was hosting other hunters that weekend so we had to set some range parameters to prevent any potential incidents. As John and I were patrolling in our Hum-Bug a.k.a. 'Stealth Machine' my wife was sitting in a tower blind up by the windmill scouting for us. With about 10 minutes of hunting light left I received a call from my wife and she said "hurry I see a 6X6 bull grazing up around the windmill." We wasted no time and as we approached I was prepping John on what to expect when we get there. When we pulled into the field it was pretty dark and with the ranch not receiving any rain since July everything was a cloud of dust. When the dust settled and John was able to find the bull in his scope we had to make certain it was the right bull.

Ironically, there were two bulls within 10 feet of each other. Typically this would not be an issue but these two bulls were similar in size and it was really close to being too dark to see. We literally had seconds left to shoot. I had to communicate with my wife up until the shot just to be certain of which bull to shoot. This was the epitome of team work. When we were certain of our target big John squeezed a shot off from his .300 Winchester directly in the chest cavity of the 6X6 bull elk. The bull was facing us when he shot and was approximately 100 yards from our location. We saw the bull buckle and he gently made his way into the brush with the other bull which made it impossible to put another round in the already wounded bull. Since it was dark and we didn't want to push the bull we decided to come back in the morning and search for him.
I could hardly sleep that night because of my anticipation to find our bull Elk. Sunday morning came and we set out to sweep the area we suspected the expired bull.

We searched for hours that morning before we decided to call a neighbor who had some tracking dogs. The only problem was that we had no blood trail because of where the animal was hit the bullet probably did not exit. When Buzzy and his dogs showed up we started again looking for any sign. We search for several more hours and finally a blood trail was spotted and we made our approach to some cedar bushes and we were greeted with a giant 6X6 Bull that was very much still alive and mobile and the chase was on. The tracking dogs did a phenomenal job as one stayed on the nose and one stayed on the heels barking to let us know where this animal was heading. The big bull had little use of his front right leg from last night’s bullet. However, this bull was not going quietly. The bull, dogs, and 4 people were in pursuit as the elk was making his way toward a deep 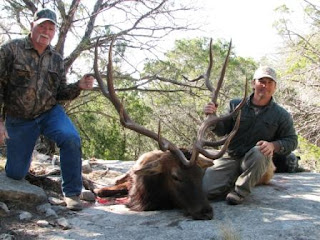 As the bull was showing no sign of quiting I was taking cedar branches across the face in full pursuit because I was not about to let him get out of my sight. I was breathing heavily but adrenaline was finally kicking in and I was staying hooked. We finally made our way through the thick cedar brush with steep rock walls on both sides to get a final shot on this belligerent animal. When he finally went down he laid on a giant flat rock plate about 400 square feet in size and inches from a cliff that drops 30 feet down into another pit of rocks. The bull was so close to going off this cliff that when he bled out it was running over the ledge of this sheer drop. This was such an amazing hunt and pursuit it warrants a little downtime on the couch.